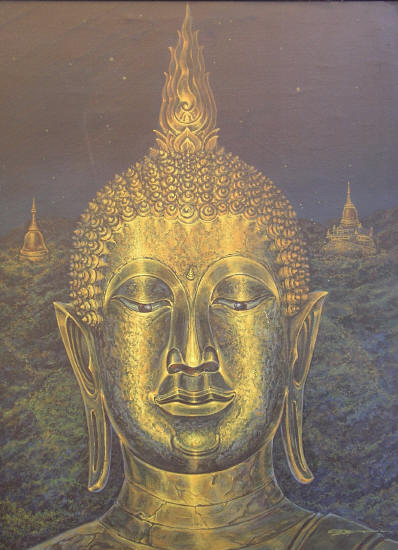 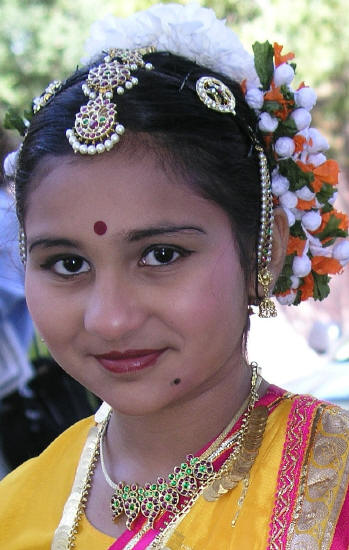 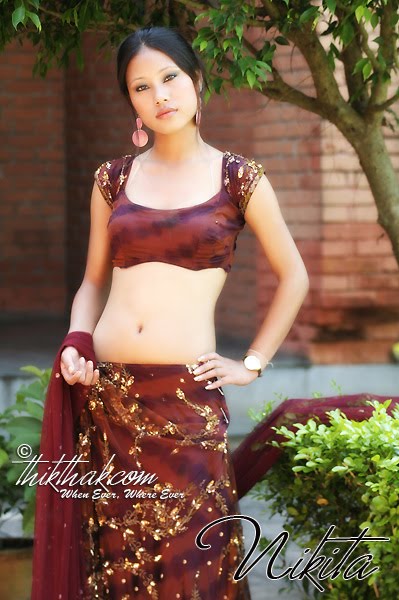 Aishwarya Rai, Miss World 1994, is the woman the most known in India.
Also actress, she is very famous with movies like with " Bride and Prejudice ". The technique of draped sari varies according to the regions, the castes, the activities, the religions,...
It exists around 31 types of draped. The sari is the traditional garment worn by many women in India ( and also in Nepal, Bangladesh and Sri Lanka ). The sari is a very long strip of unstitched cloth, ranging from five to nine yards in length, which can be draped in various styles. Mahatma Gandhi ( मोहनदास करमचंद गांधी ) was born the 2nd of October 1869, in British India.
This man is not like the others, he has helped India to have its independence in 1947 ( August 15th ) with his friend Nehru. Two countries are created : Pakistan ( with Muslims ) and India ( with Hindus ).
He died at the age of 78 years old, the 30th of January 1948, in New Delhi in a new country : India.
Today, we can see Gandhi everywhere : on the Indian currency, at the house of all Indians, on statues, ... The Taj Mahal : monument of an only country in the world...

This monument is located to Agra, in the North of India. It has been built by a man : the Emperor Shâh Jahân ( he had just the idea ) because he wanted to have a monument in honnor of his wife, Arjumand Bânu Begam, died after the born of their 14th child, the 17th of June 1631.
The construction began in 1632 and it finishes in 1644. Around 20 000 men and 1000 elephants worked for the constuction of this monument. Bengal tigers live in India, Nepal, Bangladesh, Bhutan, Myanmar and in the South of China ( Tibet ).
Its fur is generally orange-brown with black stripes but there are also with Bengal tigers.
It is the national animal of both Bangladesh and India 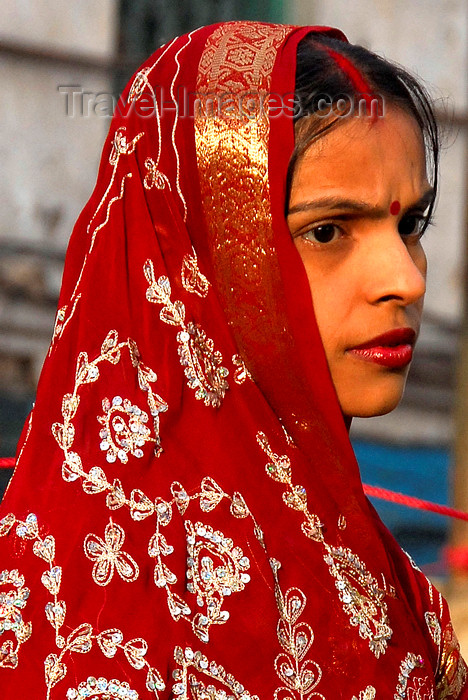 Hot Saree: Sarees are the garment of choice for an Indian woman. Sarees are worn by 90% of Indian women and it is the most gorgeous clothing outfit for any woman. 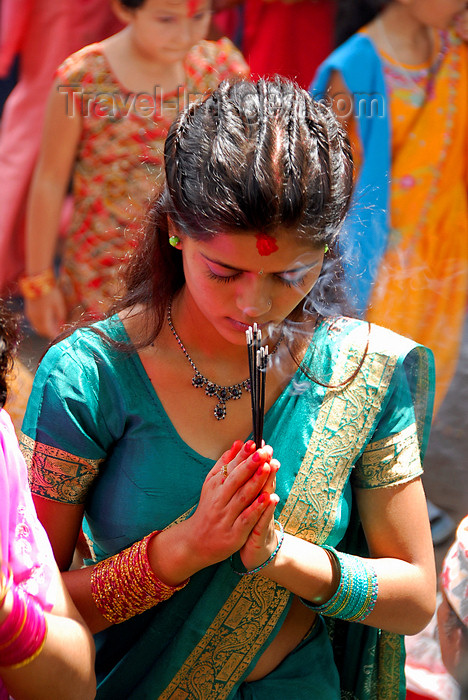 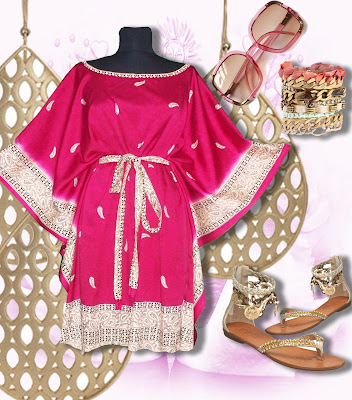 From Wikipedia, the free encyclopedia

Shiva (pronounced /ˈʃiːvə/; Sanskrit: शिव, Śiva, IPA: [ˈɕivə]; Hindi: [ˈʃɪʋə], meaning “Auspicious one”), also known as Rudra (the “Feared One”) is a major Hindu god and one aspect of Trimurti. In the Shaiva tradition of Hinduism, Shiva is seen as the Supreme God. In the Smarta tradition, he is one of the five primary forms of God.[2][3]

Shiva is usually worshipped in the form of Shiva linga. In images, he is generally represented as immersed in deep meditation or dancing the Tandava upon Maya, the demon of ignorance in his manifestation of Nataraja, the lord of the dance.

In some Hindu denominations, Brahma, Vishnu, and Shiva represent the three primary aspects of the divine, and are collectively known as the Trimurti. In this school of religious thought, Brahma is the creator, Vishnu is the maintainer or preserver, and Shiva is the destroyer or transformer.[5]

According to Gavin Flood, “Śiva is a god of ambiguity and paradox,” whose attributes include opposing themes.[108] The ambivalent nature of this deity is apparent in some of his names and the stories told about him.

In the Yajurveda, two contrary sets of attributes for both malignant or terrific (Sanskrit: rudra) and benign or auspicious (Sanskrit: śiva) forms can be found, leading Chakravarti to conclude that “all the basic elements which created the complex Rudra-Śiva sect of later ages are to be found here.”[109] In the Mahabharata, Shiva is depicted as “the standard of invincibility, might, and terror”, as well as a figure of honor, delight, and brilliance.[110] The duality of Shiva’s fearful and auspicious attributes appears in contrasted names.

The name Rudra (Sanskrit: रुद्र) reflects his fearsome aspects. According to traditional etymologies, the Sanskrit name Rudra is derived from the root rud-, which means “to cry, howl”.[111] Stella Kramrisch notes a different etymology connected with the adjectival form raudra, which means “wild, of rudra nature”, and translates the name Rudra as “the wild one” or “the fierce god”.[112] R. K. Sharma follows this alternate etymology and translates the name as “terrible”.[113] Hara (Sanskrit: हर) is an important name that occurs three times in the Anushasanaparvan version of the Shiva sahasranama, where it is translated in different ways each time it occurs, following a commentorial tradition of not repeating an interpretation. Sharma translates the three as “one who captivates”, “one who consolidates”, and “one who destroys.”[114] Kramrisch translates it as “the ravisher”.[76] Another of Shiva’s fearsome forms is as Kāla (Sanskrit: काल), “time”, and as Mahākāla (Sanskrit: महाकाल), “great time”, which ultimately destroys all things.[115][116][117] Bhairava (Sanskrit: भैरव), “terrible” or “frightful”[118], is a fierce form associated with annihilation.[119]

He is depicted as both an ascetic yogin and as a householder, roles which are mutually exclusive in Hindu society.[125] When depicted as a yogin, he may be shown sitting and meditating.[126] His epithet Mahāyogin (“the great Yogi: Mahā = “great”, Yogin = “one who practices Yoga“) refers to his association with yoga.[127] While Vedic religion was conceived mainly in terms of sacrifice, it was during the Epic periodthat the concepts of tapas, yoga, and asceticism became more important, and the depiction of Shiva as an ascetic sitting in philosophical isolation reflects these later concepts.[128]

As a family man and householder, he has a wife, Parvati (also known as Umā), and two sons, Ganesha andSkanda. His epithet Umāpati (“The husband of Umā“) refers to this idea, and Sharma notes that two other variants of this name that mean the same thing, Umākānta and Umādhava, also appear in the sahasranama.[129] Umā in epic literature is known by many names, including the benign Pārvatī.[130][131]She is identified with Devi, the Divine Mother, and with Shakti (divine energy). As a householder, he is known for the great love and respect he has for his consort.

Shiva and Parvati are believed to be the parents of Karthikeya and Ganesha. Karthikeya is worshipped in Southern India (especially in Tamil Nadu, Kerala and Karnataka) by the names Subrahmanya, Subrahmanyan, Shanmughan, Swaminathan and Murugan, and in Northern India by the names Skanda, Kumara, or Karttikeya.[132] The consorts of Lord Shiva are the source of his creative energy. They represent the dynamic extension of Shiva onto this universe[133].

Story Of The Nataraj: Dancing Shiva

Henna Hand with Camel in Morocco 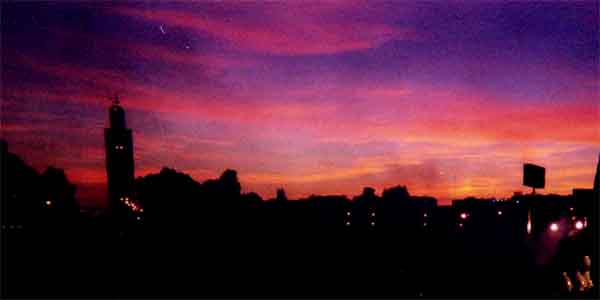 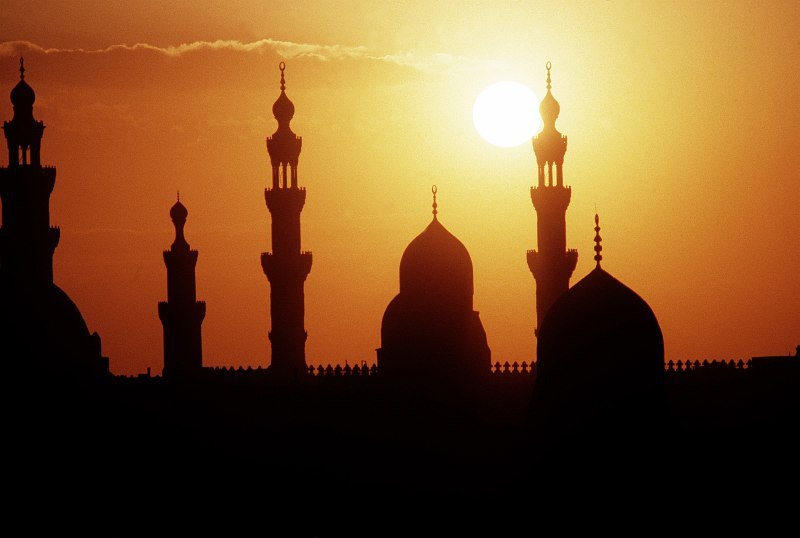