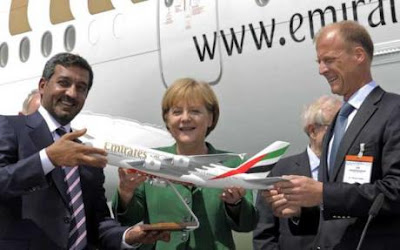 Emirates airlines has ordered 32 Airbus A380 superjumbo jets, in what the manufacturer said was the world's most expensive order of commercial aircraft.

Emirates's order, announced a the opening of the Berlin Air Show, would be worth just over $11bn at a list price of $346.5m per plane – although airlines typically receive discounts for large orders.

The scale of the order surprised Emirates' competitors.

"It is already to many of us a miracle that Emirates now already has more seats on intercontinental routes than Air France and BA together with a relatively small home market," Wolfgang Mayrhuber, Lufthansa chief executive, said in a briefing at the International Air Transport Association's (IATA) annual meeting.

Emirates, which started in 1985 with two planes, has grown to rival the likes of Qantas and Singapore Airlines for traffic between Europe and east Asia and is expected to earn $1.16 billion in 2010.

It came as Airbus parent EADS showed off the capabilities of its embattled A400M military transporter plane and as it faces a dispute with German military bosses over problems with two of its new helicopters.