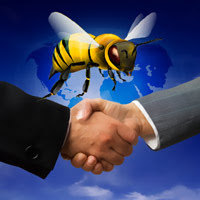 Published on 02-14-2010 03:47 PM
Members of the Swarm pledge to conduct themselves in accordance with the following:
1. We will enthusiastically welcome all new Swarm members regardless of their other affiliations, their race, or their other personal beliefs.

2. We will treat others in a civil manner and with the respect that all good American Citizens deserve.

3. While representing ourselves as a member of the Swarm, we will support those who support Freedom's Vision regardless of their political affiliation. We are free to support and affiliate with any political party.

4. We will be victorious in the fight to restore the money power to the people. This issue is the defining issue of our time and will determine the future path of America for future generations. We refuse to be silent and if anyone expresses doubt about achieving our objective we will speak to them in an uplifting manner. No matter how long or how hard the path may be, our cause is just and it is We the People who hold control of our own destiny.

5. We will not allow the Swarm to become divided, nor will we allow our attention to be diverted. I will not attempt to bring in, nor will we allow others to bring in, issues outside of our Initial Mission Statement until the initial goal of monetary and political reform is achieved. I support and am aware of the Immediate Action Mission Statement:
Enact monetary and political reform capable of transitioning our economy from its current debt and derivative entangled state to a prosperous & sustainable system that works to keep the quantity of money under control for the very long term.

6. Members of the Swarm pledge to conduct ourselves in a non-violent manner and will not accept nor tolerate anyone advocating violence on behalf of the Swarm.

7. As Swarm participants we are exercising our First Amendment right to Free Speech. Our goal is simply to communicate to our representatives that We, the People are requesting that our elected representatives Repeal the Federal Reserve Act and replace it with the provisions of Freedom's Vision. We pledge not to allow anyone, no matter their position, to deny any member of the Swarm their right to Free Speech. Members of the Swarm see through and reject any attempt to place a derogatory label on any Swarm member. We are not "rebels," "extremists," or "conspiracy theorists," and we are certainly not "Terrorists," or "anti-American!" We are pro-America, we are AMERICAN CITIZENS who will support politicians who support Freedom's Vision and we will work to actively remove from office those who oppose it.

8. Members of the Swarm understand and agree that use of "battle terms" or "target" language is not meant in any way, shape, or form a threat against any person's physical safety or their property!

9. We agree not to attempt to contact elected representatives or other Swarm targets at unlisted personal numbers or locations without invitation. We will not make public any such number or location. Additionally, we agree to keep one another's contact information such as email addresses and phone numbers private and will not share such information without consent.

10. We agree that the future of the United States is worth 10 minutes of our time per week. We agree to contact at least 10 other people and will ask them to register and participate in the Swarms on behalf of their country and their children's future.